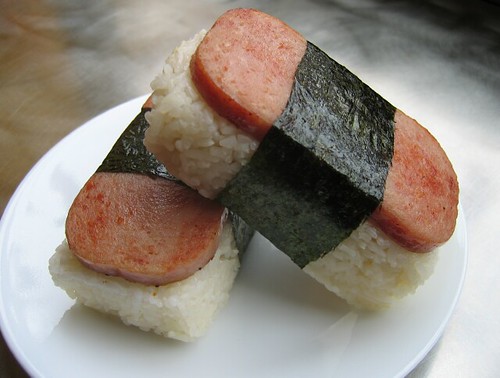 Not surprisingly, I came back from Hawaii about 5lbs heavier even though I was eating oatmeal basically everyday still. (sadly that was for real)

Laying on the beach and eating spam musubi — they're kind of addictive, contributed to the problem.

It's funny how one week you're eating at the French Laundry, eating caviar and foie gras and baby lamb — going to hell but it was still good, and the next week you're getting down and dirty with spam, rice, and seaweed. $250 meal vs. $2 worth of good, yummy, tasty spam. No contest.

We ate for $35 a day per person in Maui too, so Rachael Ray can kiss my ass. 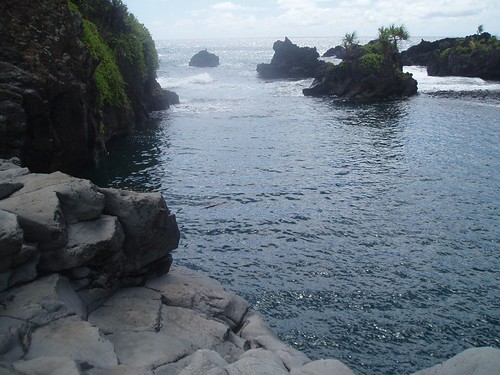 Waikoa Pond (or Venus Pool) is at mile marker 48 on the Hana highway in Maui. You have to break the rules a little bit and go past a barb wire fence, follow a trail, past an old stone oven(?), down a bit, and then you're there.

Apparently in old Hawaii, this swimming hole was reserved for royalty. You can totally see why. It's pretty cool and there were only a handful of people with us hanging out, swimming, and diving. The pool is at least 15 feet deep and it's very calm. There's some fish swimming about as well. Beyond the pool is the ocean full of grey sharks and fairly rough water.

I'm glad I brought my MacBook and that we had really good Web access over in Hana, otherwise, I never would've found this place. It'll probably be the highlight of our trip, it's a pretty neat watering hole — the water is calm and swimmable, there's a black sand beach on the other end, lots of rocks to dive off of, and you're just surrounded by cool scenery of bright green against black lava rocks. The best parts though are there's not that many people around, certainly no one in the water, and few will ever find this place. 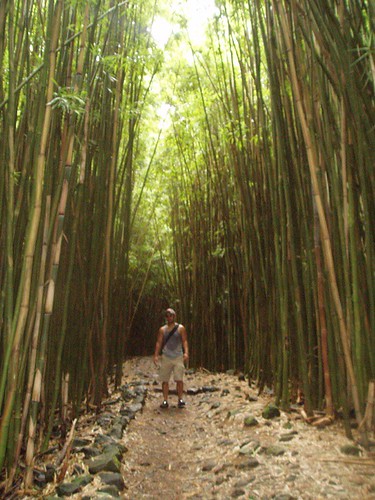 We did some hiking yesterday and took some more cool photos of waterfalls, bamboo forests, pools, etc. This photo here reminded me of the Indiana Jones ride at Disneyland except there wasn't a ride at the end, there weren't any snakes, and no theme music.

The sounds of the bamboo clicking and clacking as the wind hit 'em was very neat. It was also cool to see the laws of survival as all the bamboo trees are competing for light and have to grow really tall to get to that light. There's practically zero small trees growing in the bamboo forest.

Anyway, we go through this bamboo forest on our way to Waimoa falls. It's a 2 mile hike up to it and it's pretty long. We have to cross through a couple of small streams and there's lots of guava trees on the way up too.

Apparently guava trees grow like weeds. It's cool to pick the guava fruit though, I had a bunch on the way up. I looked up the nutritional value for guava and one cup of guava (probably 2 or 3 of the fruits) is like 624% of your daily allowance for vitamin C. I was somewhat getting sick which happens after Ironman. I had been taking airborne but it all really kind of went away after I went all gluttony-like on those guavas.

I have one more cool post and then one a little more recommendation/tip related on the overall trip to Maui. I'm very disappointed with the Web as far as it helping us out on planning this trip (where to go, places to visit/stay, etc). There were some highlights where the Web was extremely useful but more or less it could've been better especially since it's 2006 and not 1996. 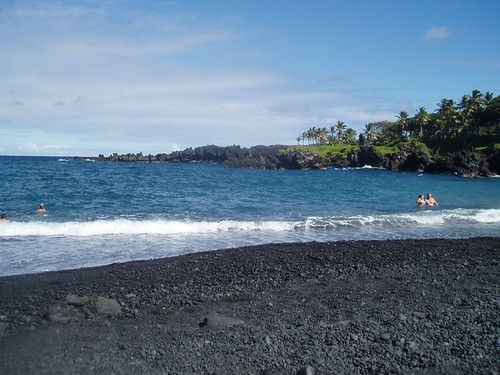 Blogging while "on" vacation (versus blogging about it when you get back) is pretty lame and fairly sad. But I'm not on vacation since I'm really checking out the Maui tech industry and possible office space…right.

Anyway, I've got some photos up and will post up more as I go along. Above is a black "sand" beach, it's over at Waianapanapa State Park. It's more like a black lava rock beach with lots and lots of stones, s|m|large and it's not the most comfortable to walk in, but laying out on the beach isn't bad. Apparently there aren't too many black sand beaches. This is the first one I've been to and it's pretty cool.

I'm not an elite runner, this is just for the average person who wants to start running as exercise, to lose weight etc. I've picked up a few things when I started running again several years back.*

That's about it. You don't have to eat before, during, or after in terms of what should I be eating. You should be drinking water throughout though.

Running is about the easiest way to lose weight and it can be fun, especially if you run with people or train for an event.

—-
* I'm not a personal trainer or a coach or anything like that. This is just some things I've picked up and maybe people find it useful. I'm not a nutritionist either but people seem to want to eat oatmeal after I've posted my now infamous Oatmeal Diet and unleashed on to the webosphere.

"the passionate pursuit of perfection"

We're looking to get a Lexus IS 250 rear wheel drive manual in the matador red, it's not quite perfection but close enough. We're looking to get it before the end of the year but ordering a Lexus is fairly tricky, you just can't order the car it sounds like. It'd be great to get the IS 350 or the 250 with all the bells and whistles but apparently people don't like to make manual cars anymore (nor do people know how to drive them). Supposedly only 1.9% of all Lexus IS's are manual.

The drive is quick, interior is really nice, the technology is slick, the styling is ok, the color is awesome, the gas mileage is great, the reliability record is great, but room for people in the back seat sucks.

The other car that we're looking at is the Mercedes Benz C230 in a manual and in a barolo red. The best thing about the C230 is the styling (and well, availability). The IS trumps the C230 in just about everything else, but styling is pretty important and the differences save for the gas mileage difference (about 9mpg difference) aren't that big.

We got an email from our friend Christine today. She's the one on the right. She's an old roommate from back in the day and she's freaking really cool. As part of that performance, she was painted on a mural (Harrison and 14th Street in San Francisco). Her performance w/ Streb was also on the Dave Letterman show. That was cool. Modern dance is still hard for me to grok but whatever. I have a friend who dances and it's fun watching her perform.

On TV
PBS is airing an excellent documentary on Elizabeth Streb and the company. The program is called "In the Life". Check out their website to see the promo and to find out when the program will play in your area: www.inthelifetv.org

Skip the story, if you know the drill/need the tax break, and donate (https://rebron.org/TNT/donate.html) to my fundraising for the Leukemia Lymphoma Society, IronTeam 2007. I'm looking to raise another $7,500 as I train for Ironman Arizona AND Ironman Canada in 2007. First deadline is Sept 15.

—
My first Ironman in 2004, done in 15 hours and 52 minutes while raising over $7,500 for the Leukemia Society, was to prove that I'm a little crazy. The second Ironman in 2005 done in 16 hours and 37 minutes was to reinforce just how crazy. And the third Ironman Canada, finished in 13 hours and 59 minutes just a week ago, and now over $13,000 raised for the Leukemia Society removes all doubt. I'm not sure what 2 Ironman races in one year will mean but it doesn't look like I'm stopping the insanity anytime soon. 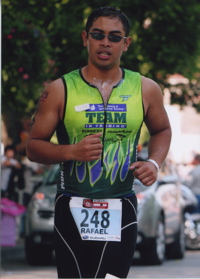 An Ironman triathlon is a 2.4 mile swim, followed by a 112 mile bike ride, and a 26.2 mile run accomplished all in one day and it's actually pretty hard. There are many Ironman triathlons set around the world and the winners from those races compete at the world championships in Kona, Hawaii where the first Ironman was held (I'm not going there anytime soon). The three Ironmans I've done so far were in Penticton, British Columbia/Canada, a very beautiful place.

I've done all my Ironmans with Team in Training. Team in Training (TNT) is a division of the Leukemia and Lymphoma Society and is a cool organization. I started up with TNT in 2003/2004, urged by a friend to join because I could have been a little bit healthier. I didn't know anyone affected by blood related cancers when I first joined, and then just about everyone I knew was affected including my wife's cousin diagnosed with non-hodgkins lymphoma in early 2005. Because of the advances directly attributed to donations like yours, our cousin is doing well. However, there are still some people who aren't so lucky.

There's a handful of people I do this for including Cole Regan who passed away in 2004, Louie Bonpua a Filipino sports hero, an Ironman/IronTeamer who passed away in 2002, Lesley Mansford, my teammate who's diagnosed with CLL AND finished Ironman Canada in 2006, Laura Warren, a cancer survivor and good friend of mine, and sadly I can keep going.

Back to the fun stuff. Ironman Arizona is set for April 15, 2007 and the 25th Anniversary of Ironman Canada is set for August 26, 2007. I'm looking to improve my time by a couple more hours but more importantly have fun with IronTeam 2007. Every year our team has raised over $750,000 for Leukemia and Lymphoma Society. We not only attempt probably the hardest event that TNT offers, we fundraise the most too.

Thanks for all the help, you can follow along with my training (or train with me vicariously or for real) at www.IronTeam.net or here at rebron.org.

I've got one more post re: Ironman 2006 talking about my team. This one is about all the cool gear I have and/or want to have. So here we go, Ironman head to toe:

Wear throughout the race

There are two web problems I'd like to see solved or solved in a better way:

a) Discovering new web sites. In the early days it was What's New | What's Cool from Mosaic and then Netscape. Yahoo still has a pretty cool What's New web site, and modern day What's New/Cool sites include Wikipedia front page, Digg.com, and Del.icio.us. Another method of discovering new sites is through blogs, bloggers put up links they find interesting. People don't really "discover" or look to discover new sites through search engines, they're more looking for information. And finally, people discover web sites offline through advertising, word of mouth through friends and family, and television.

b) Filtering of web sites/information. The other problem (and I believe fairly major) with the Web is too much information in general, and too much information within a given site. It's certainly hard to control what a site gives you, I have a hard time filtering and finding the information on my own site. With the explosion of blogs, attempts to consume all that content has come in the form of blog readers. Other tools in the past include bookmark managers, alerts (like CNN or Google alerts), "My" pages, and blog sites themselves. Tabbed browsing helps users consume more sites and popup blocking helps to filter out bad content.

More on these topics later.