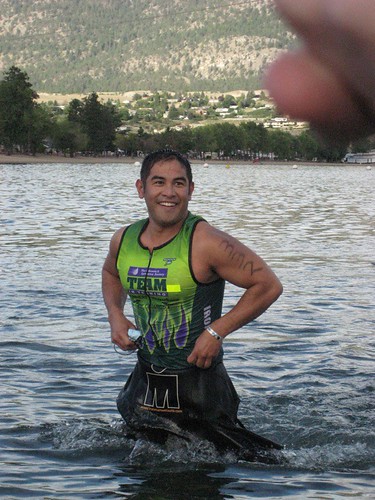 This was the 25th anniversary of Ironman Canada and my fifth Ironman race overall (four Canada and one in Arizona). This was also my second race within a year which wasn't actually that bad.

Here's some of the highlights:

— This year I drove (w/ Mom) and it was a stupid thing to do. We drove to Seattle and then headed up to Penticton. It's just too long a drive and I was tired before and after the race. The drive was harder than the race itself but I love my car. The X3 aka Greta rocks.

— The race itself was good. Did it with IronTeam again. I know the course pretty well now and the people are great; Penticton is such a beautiful place and Canadians are really nice.

— I wanted to do the race in 12:30 or even 13:30 but ended up with a 13:51 time which is fine. I'll come back again and do better one day. There was nothing different from last year except that there was more people, the weather was nicer (except for some wind), and I was able to run most of the first half of the marathon.

I'm glad I'm not doing another race for a while and I guess with five Ironman completions under my belt I can chill out for a few years and find something new. To think I've spent five days out of my life where that whole day was spent swimming, biking, running, in total it's 12 miles of swimming, 560 miles of cycling, 131 miles of running for those 5 days. It's a little crazy.

I'm closing in on another Ironman season so doing some reflection.  Training for an Ironman isn't the most safe thing in the world.

Oh, and I could also die from over exertion, hyponatremia (basically drink too much water and drown my lungs), or just pop my heart from getting my heart rate up to redline (I get pretty close sometimes).