These porcupine roaches are absolutely gorgeous. The small one is actually a turkey beard roach made out of turkey beard and deer hair.

These headdresses are made by Dancer's Choice which is aptly named.

Porcupine roaches are hard to make. Sounds like the maker sources the porcupine hides and gathers the porcupine guard hair and quills himself. The hardest part of roach making is sorting the hair into the different lengths. Another hard part is the base. If it's a premade cotton base, obviously it's not hard. A traditional base though is made out of deer tail hair that's been tied to a cord and then trimmed short and then sewed to make the base.

The rest of the time consuming build is tying and then sewing. It's the shape — where it spreads and how it tapers —  is what really makes a well made porcupine roach stand out (although flat or upright is a style choice with flatter/spread roaches for grass and traditional dancers while straight and fancy dancers may prefer more upright roaches). 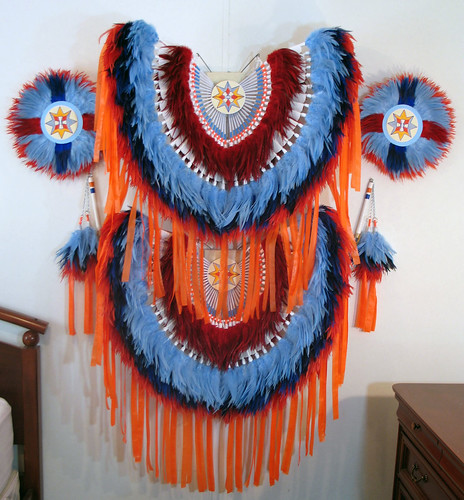 This is the set of fancy dance bustles that I hope to be wearing soon at Berkeley, Stanford, and DeAnza pow wows this year.  Next year, I'd like to hit up one if not all of Denver March, Gathering of Nations, Schemitzun, and Red Earth.

I have a set of ideas for what I want my next set of beadwork to look like so excited about getting that done in the next couple of years too.

Here's what this looks like. And here's the "Mac No More" song below.

One of the best fancy dancers in the business. His huge bustles and acrobatic moves (splits and cart wheels) are his signature. He dances fairly mellow and then turns it on big time.

This is Derrick Davis. He's a champion hoop dancer and I think he did a stint with the Native American Dance Theatre. Anyhow, I hadn't seen him dance before but I heard lots of good things and was amazed that he won the Hoop Dance competition at the Heard Museum dancing with just 5 hoops. Needless to say, he's a much, much better hoop dancer than I am (especially since I've been retired for about the last 9 years). I got my hoops back from my parent's house the other day though…

This is Michael Roberts. I've met him twice, once in Connecticut at this low key pow wow at Foxwoods and then again at the Stanford Pow wow last May. He's one of my favorite dancers. Mike's footwork is phenomenal and his outfit is one of the best– the beadwork, the featherwork are really beautiful. He's getting two songs here, a Northern song and a Southern contest dance song. Talk about that later.

I popped over to the Heard Museum today. It's a museum with Native American art and exhibits focusing mostly on the SouthWest. I've been meaning to go here and actually come down here during the World Hoop Dancing championships in February. And while it would be cool to compete, you have to be Native American to do it (no matter how good you can dance).

My little secret about doing Ironman races is to actually get into dance shape so that one day, once I have all my beadwork, featherwork, and dance clothes all ready, I can take a year off, strut my stuff, pop over to all the big Pow Wows like Denver March, Stanford, Gathering of Nations, Red Earth, United Tribes, and finish off at Schemitzun. It's looking like that's not going to happen until I'm 35 but probably 40 or 50 at this rate with work. Just one year, dance my heart out, and have everyone who was there wonder "who was that…" or "remember that dancer…". Dreams are neat to hold on to and the Heard Museum was pretty cool.

UC Berkeley Pow Wow is this weekend, April 7 – 8 from 11am to 7pm. I'm guessing Grand Entry is at Noon or 1pm. Going to swing by for an hour or so, grab some fry bread and bounce. Should be fun. Grand entry video from last year's pow wow. 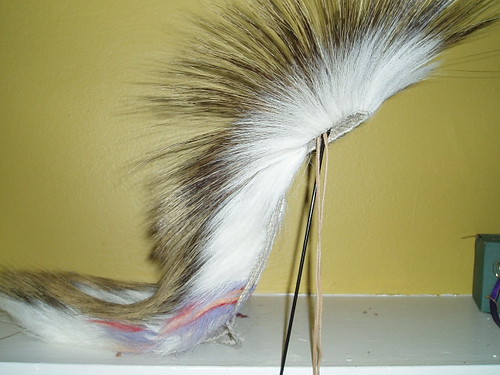 I looked up roach on the various search engines and all I got was Papa Roach, Roach clothing, and cockroaches. Not a peep about porcupine hair roaches not even on Wikipedia. That's awful.

Here's the history of the porcupine roach which is a Native American headdress made out of porcupine guard hair and deer hair. Sometimes roaches are made out of skunk hair (instead of deer hair) and I've heard the very early ones were made out of turkey beard hair.

Porcupine roaches are what essentially every modern Native American pow wow dancer wears on their head, except for the women and not all Southern Straight dancers (who wear a hat made out of otter fur).

Roaches cost about $300-$500 or $75+ for a roach kit. I've made two roaches, one I still have and one that was 15" that I sold a long time ago. They take forever to make. The hardest part is sorting the hair. You have to sort the hair in .5" groupings from 5" all the way to 11" – that by itself could take you a week to do. Probably takes a month to build out a roach.

To put on a roach the right way, you have to have long hair. You take a braid of your hair, put it through the hole in the roach, and secure the roach down with your hair and a roach pin. I'm talking about a different roach pin…I don't have long hair so I use leather laces.

The finishing touch to the roach is a couple of eagle feathers secured via a spreader. The spreader is supposed to spread the roach hairs so that it fans out and looks cool, versus sticking straight up and looking not so cool.

So that's a porcupine roach. 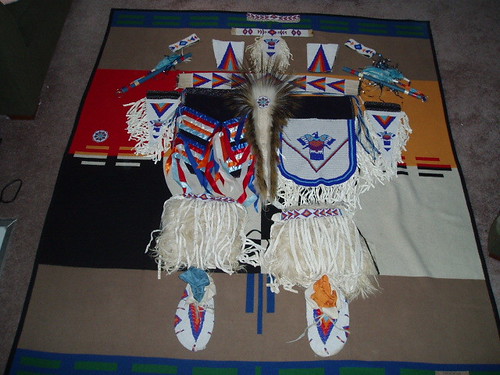 Materials cost me about $2-3,000, and I would value all of this stuff to be about $10-$15,000, but priceless really. I have sold some stuff before and gave away other beadwork (bags, jewelry, beaded turtles).