"Do not touch me or even look at me. I am too expensive for you." 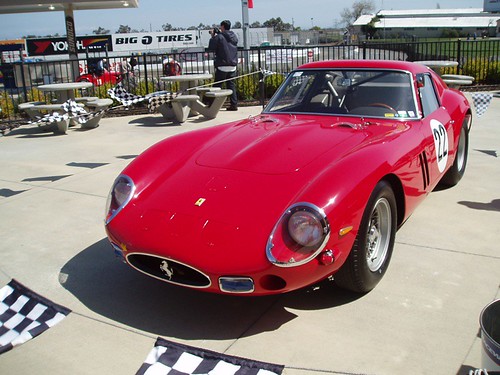 Thus sayeth the Ferrari 250 GTO that I saw Saturday morning at a car classic. Apparently this Ferrrari 250 GTO:

And, folks who own these cars actually drive them around the track and race 'em w/ no insurance. Damn, it must be good to be rich. 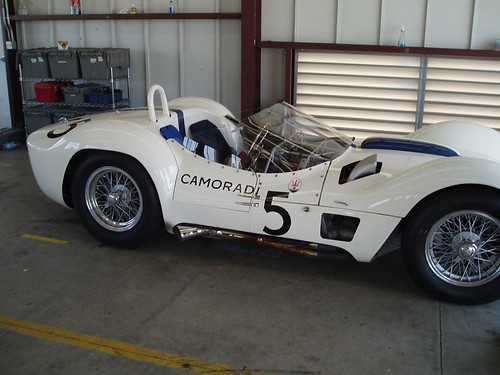 There were a lot of cool cars at Infineon Raceway last weekend for the Classic Sports Racing Group. Saw a birdcage Maserati (above), a Shelby Cobra, a forumla one car driven by Andretti, and several cool Lotus cars — even got to ride in one around the track, that was freaking fun!

The classic race car hobby is a little pricey. It's fun hanging around people with that kind of money though. It would be cool to take racing school. Skip Barber is supposed to be pretty good, a three day intensive course. There's nothing like good pots. We're doing a slow kitchen upgrade, kitchen 1.5 if you will. Kitchen 1.0 consisted of cheap Emerilware non-stick pots and pans built by All Clad. They've done well the past 5 – 6 years and it was a good starter set. All Clad's marketing is pretty good but I can't really say the same for their low-end pots and pans — their low end pots are just ok, a bit overpriced, and slightly overrated.

So over to Matfer Bourgeat products. We got a 7 1/2 quart "sauce" pot (we use it as a stock pot) and I like it a lot. We got it from Culinary Cookware but I think there are probably cheaper places to buy these pots.

I christened the pot with this killer mussels with saffron and mustard recipe. The next day cooked some pasta in it and none of the pasta stuck to the bottom, sign of a good pot.

Let's just say I get to ride in this thing once in a while and maybe get to drive it to Mountain View especially since it gets 24/32 MPG. It's got Navigation, the Luxury Package (whatever that means), but I have to say my favorite feature is the keyless entry. You just walk up to the car, open the door handle, and go right in. Press the button, and the engine starts. No messing around with a key. 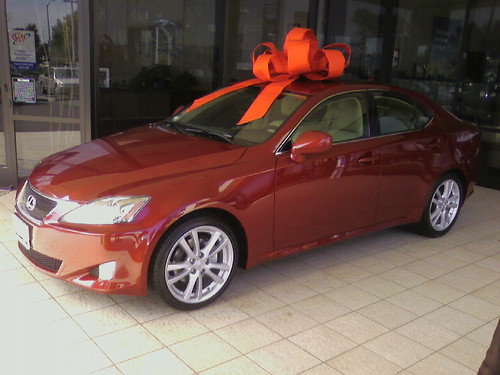 The handling isn't as good as a BMW, it's a little soft on turns. The sports shift is cool and the paddle shifters aren't bad either. It's going to take a little getting used to, I'm old school and love manual cars. But, this thing is fast, fast, and smooth. On the practical side, this car will be around for like 20 years and it's pretty darn safe. 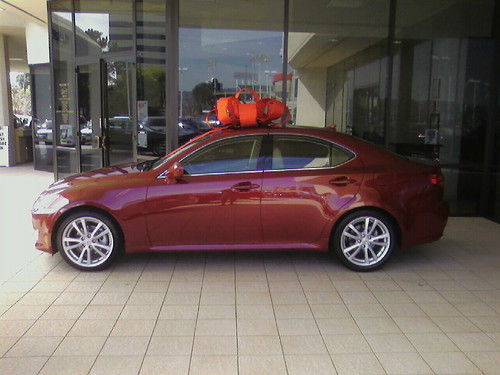 Tough life right? Never expected I'd take part ownership in a red sports car/rice rocket. I'm still more the dark blue Jeep wrangler, khaki soft top, off-road type, while wearing Keen sandals, khaki shorts, and some blue or black generic polo shirt. I have no idea what to wear in this car. I need to bust out the Armani suits I guess. 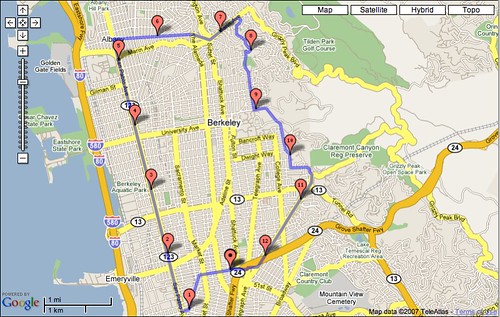 This is one of my routes, it's a 12.5 mile route. Here's a description of it and I think it's an interesting enough route. I'm sure CAL students who run would enjoy it.

Mile #1: From my starting point to mile 1 is basically the hood, the ol' Black Panther neighborhood. It's always quiet though and the houses are a mix of nice craftsman style houses to some rundown houses. I pass by a church, a couple schools, and a bunch of new lofts including Green City lofts which is a "green" building. If I make it to mile 1 alive, I'm in good shape. Wear your bullet proof vest when you run and you'll be fine.

Mile #2: I could go further down and pass by the mall and Pixar headquarters but instead I take a right on to San Pablo avenue and pass by the infamous Oaks Card Club. Along this stretch I'll also pass by an IHOP, Arizmendi bakery, Your Black Muslim Bakery, and a lot of people who aren't the most fortunate in the area. This is called the Golden Gate district or Three Corners where Oakland, Emeryville, and Berkeley intersect.

Mile #3: Lots of interesting stuff around here as I near University Ave including some of my favorites: Good Vibrations, Cafe Trieste, East Bay Nursery, LaneSplitter's Pizza, Everett & Jones Barbecue, EcoHome, and Fenton McClaren. There's a lot of garages and salvage yards and antique stores. It's a pretty neat area. There are a couple interesting restaurants that we haven't tried yet either.

Mile #5 – 6: This is basically Solano Ave in Albany. Solano Ave I haven't explored much but lots of restaurants and they also have a Zachary's pizza here and a movie theatre. I think it's Albany's main street. The restaurants are all over the map, Korean, Japanese, Chinese, French, etc. Lots of stuff on this street.

Mile #8-9: Rather uneventful, it's all downhill through the million dollar homes in Berkeley to UC Berkeley.

Mile #10: Running through the UC Berkeley campus is interesting. It's funny to see how young college kids look. I didn't realize it, it's almost like they're in high school to me. Most kids are walking around with their iPods and the dress of UC Berkeley students ranges from Gap-like to scary strange.

Mile #11: I could run down College Avenue which would make this post even longer because of all the cool stores and restaurants on College Ave in the Elmwood and Rockridge districts. Instead, I make a beeline over to the Claremont Hotel and go downhill on Claremont Avenue.

Mile #12: Well this is the home strecth. Claremont is pretty uneventful. Lots of million dollar homes down to half a million dollar homes at the bottom of the street. I pass by the DMV, a couple of Eritrean owned coffee shops, go undereath an overpass (Highway 24) and head home.