I've stumbled on a bunch of cool (cool to me anyway) modes of transportation.

Tesla Motors: the electric sports car that looks like a Lotus but gets 135 miles per gallon, 0-60 in 4 seconds

The Mark V bicycle from Iro Cycle. It's very old school, fixed gear bike used a lot by the messengers in San Francisco. What's extra cool are the bikes w/ the horn style handle bars. These bikes are pretty cheap too about $550. Another bike, the Xtracycle. It's basically a bike w/ huge panniers. They call it the sports utility bicycle. The new Segways have been out for a while. They're cool I guess. You can see 'em around the Google campus or in San Francisco w/ tourists on them. They're great except when it rains. Then you're s.o.l. I'd love to get one of the Tesla cars. I wouldn't get anything else on this list even though it's all very cool. We've already got an BMW X3, a Trek Madone 5.2 SL road bicycle, rollerblades, snowboards, and that's really much too much already.

Here's a list of the people that we get our food from (they're within 100 miles from where we live in Oakland, California):

I love lists and I'm seeing that I'm writing more and more lists too. I stumbled upon this site called Nutrition Data* and they have a list of the top 50 foods people search for. Number one on the list are bananas. Watermelons, apples, cantaloupe, and cheddar cheese round out the top 5. Mmm…cheddar cheese.

The first fast food people search for is surprisingly enough, a Taco Bell bean burrito. There's some other weird foods on that list including Kix cereal, Snickers bar, and a Dairy Queen blizzard.

In related searching, I was also looking up Super Foods. Everyone's got a different Super Food list but I guess it's this plastic surgeon (?) Dr. Pratt that put together a list of 14. Do you now see why I think I can write an Oatmeal Diet book, the dude's a plastic surgeon BUT I do find myself eating the foods below.

Anyway, here's the list and a description by the good Doctor:

* What's neat about Nutrition Data is that they've created a Firefox search plug-in AND they're cool enough to recommend Firefox to their visitors. Here's what they say:

IF You Don't Already Have Firefox

Firefox is the new, critically acclaimed browser that many Internet Explorer users are switching to. It's packed with features, and is faster and more secure than other browsers. We highly recommend it!

My last update was on 6/16. Since then, I've done the following: 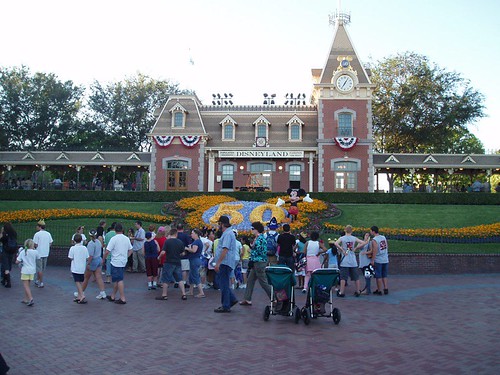 (This post provides some tips for enjoying Disneyland based on my experience from a recent trip. It assumes many things like bringing kids and wanting to enjoy most of the many rides that Disney has to offer.)

The worse thing would be to go to Disneyland this Summer, pay all that money for the tickets, hotel, transportation, and spend your trip waiting in line for 45, 60, 75 minutes at a time for rides in the 90+ degree heat in Southern California…with kids. That sucks. The alternative is to plan ahead, get on all the cool rides, have your kids remember the rides and not the long waits, and have fun.
With that here you go:

That's all there is to it. The book has the rest of the info like when to go e.g. mid-week is best like a Wednesday-Thursday, it has details on California Adventure and Universal Studios, and also tips on how not to lose your child.

I hope this was helpful :)

I'm six weeks away from my third Ironman Canada and this year I'm feeling great, much better than last year and I'm in a much stronger and better mental state than in my first year. The next three weeks is the final push of training which will include a triple brick workout (a 2 hour bike ride, 1 hour run 3 times through) and then the Marin Century ride the week after.

This year, if I run I should be able to shave off at least an hour or so off my total time from last year. I'm looking at staying within the 14 hour range this year, if all goes well. It should, I'm in better shape, healthy, and I'm in a much better groove w/ my nutrition.

I'm on a strict six week diet which is oatmeal for breakfast in the morning, all the fruits and vegetables I can eat, chicken breasts, eggs, lean deli meats, fish, and tofu. No bread, no cheese, no sugar, no coffee. I'll get all my carbs mostly from the training ride food I use. I'm still hovering at about 180-185lb but I'm in the 8-10% body fat range (versus 12-15% from a couple months ago) so something is going right. I should drop to at least 175lbs when the six weeks is up.

I drove to Disneyland w/ wifey last Tuesday and picked up Grandma, our nephew (8), and cousin (10) from LAX and then headed off to the Sheraton Anaheim near Disneyland. We got some dinner at Downtown Disney (which is just way overpriced) and then took the kids to the hotel pool and hung out for a bit. We went to bed early and wifey and I put our Disneyland plan together.

We woke up early, about 6:30am, had breakfast in the hotel, got ready and took the first shuttle at 7:30 to get to the gates of Disneyland. We rushed over to Tomorrowland to ride Space Mountain but for some reason it was closed early. So we went to Star Tours (still lame) and then went and did Space Mountain which was now opened. After Space Mountain, we rode Buzz LightYear Astroblaster.

After Tomorrowland, we hopped over to Fantasy Land and did some combination of the Matterhorn, Mr Toad's Wild Ride, Pinochhio, Snow White, Alice in Wonderland, Dumbo, Tea Cups, King's Carousel, and some train ride.

It's about 11:30 or so and we headed back on the shuttle to the hotel to grab lunch. We went to Subway and just got sandwiches and after lunch, I took a power nap while the kids watched tv and ate their lunch.

It's July in Anaheim, it's blistering hot, easily 90+ degrees outside. We successfully avoided the heat. After lunch and the power nap, we brought the kids down to the pool for 20 minutes or so to cool off and then we headed back to Disneyland about 3:30 or so.

When we got back to Disneyland, we watched some of the parade that was going on, hopped on the train that goes around the park and got off at the Toon Town station. We headed over to Adventure Land and rode the Jungle Cruise and then went to Frontier Land and hung out at Tom Sawyer's island until 5:30 or so. We went and took a steam boat ride afterwards and then headed over to Fantasy Land and rode Peter Pan. Peter Pan was about a 30 minute wait and the longest ride we waited for the whole trip.

We left the park again to grab dinner at Denny's across the way and came back to watch Fantasmic and the fireworks.

Then we went home and watched as the kids raced from the elevator to the hotel room. That's right. They still had a lot of energy. It was 11:00pm.

We woke up at 6:30am again and kids this time weren't yet ready but we still made it on the first shuttle and got into the park at 8am. We headed quickly over to Adventure Land and rode Indiana Jones. We then hoofed it over to Splash Mountain and rode on that (great ride) and then also got a Fast Pass for it. We then rode Pirates of the Caribbean (recently upgraded, still lame), and then went and did the Haunted Mansion ride.

We went over to Tomorrowland and I took the kids to ride the Astro Glider thing while wifey went and got Fast Pass for Space Mountain. We went and did the car thingie ride and drove some cars around. It was hot and time for lunch but before we went and grabbed lunch, we went back and rode Splash Mountain.

Now Splash Mountain the first time was ok, it was just the kids and wifey and me. The second time was cool because we used FastPass and cut in front of a ton of people, the wait was 75 minutes (our wait time was 5 minutes). And! this time, there were two dudes that were 300lbs a piece that joined us on the ride. We actually got stopped at the top of the big drop because our car was so heavy and when we did go down, we freaking flew and got soaked and even went off the track. It was cool.

Before we left the park, we went and got FastPass for Indiana Jones to do it again for later. We left the park, went and did the Subway thing again, and while wifey took the kids to the pool I watched some TV and then took another power nap.

We got back to park around 3:30-4pm and we did the Tom Sawyer canoes. We went and did Indiana Jones after that and then took the monorail to Downtown Disney to do some shopping.

After Downtown Disney, we went back into the park and got some dinner in the park (El Rancho Zocalo) and took the kids over to Mickey's Toon Town and went and got pictures w/ Mickey Mouse. Notice, we did NOT ride It's a Small World. How awesome is that? After a visit w/ Mickey we went home and called it a trip.

Friday we drove and home and it's going to take a little while to recover. This Disneyland trip was very cool, very little waiting in line and any Disneyland trip over two days that let's you ride Magic Mountain, Indiana Jones, and Splash Mountain twice, is a pretty good trip in my book.