I'm interested in what video providers are doing in terms of their online advertising.  Currently it's all over the map as to when ads are displayed (before, after, during a stream, inserted in, or with ad content around the video), and duration 5, 15, 30 second ads.

My Gmail address is more or less public and pretty much all the spam is filtered correctly.  I've had a couple of Yahoo! id's but they did a smart thing by opening up the namespace with Ymail and Rocketmail.  So I have rebron@ymail.com now, come spam me!  Email = identity, it's the user's GUID for their set of services.  Email is as important as search if not more.

I had rebron@excite.com as a spam account too.  I had/have rebron2000@netscape.net which got converted to something else, rebron2000@aim.com.  I think I did have an AOL email account before I joined NSCP/AOL but didn't have an AOL account when I actually was employed by AOL.  rebron2000 is still my AIM user ID.

My primary email account is rebron@gmail.com.  I access Gmail through Thunderbird via POP.  I like how Gmail archives all of my emails so I don't have to worry about saving them locally via Thunderbird.  I don't use IMAP with Gmail, I did when it came out but it was too slow.  That might have changed.  What's cool about accessing Gmail through Thunderbird is that any spam that doesn't get caught via Gmail's filters, you can train Thunderbird to catch them.  Plus it's faster.

Yahoo!Mail – Acts like a fat client (due to Oddpost).  Integrates with Yahoo!Messenger.  Very busy user interface though.  Have to pay for other features that probably should be free, e.g. POP access.  No IMAP access still?  Calendar is still old school.

AOLMail – Like Yahoo!Mail.  Simpler, integrates with AIM.  Integrates with a better calendar.  The old AOL way of doing mail is long gone, the whacky modified IMAP.  Better than Yahoo!Mail given that mail access is open so can access email via POP or IMAP fat client of your choice.  Deletes your mailbox if you don't sign-in every six months (others might do the same thing).  They're on the right track.

Hotmail –  I don't have anything nice to say.  They don't program correctly for Firefox.  They just need to do a better job all around.

Yahoo!Mail, AOLMail, Hotmail are all moving towards a Zimbra like experience so will be interesting to see what happens in this space in the next few years.

I got one of these Dell XPS M1330 RED computers.  It's a good computer, I recommend it.

It's party season and some Web 2.0 start-up needs to put Evite out of their misery (maybe it's smokethatass.com, j/k)

1)  Create a click to add to Google Calendar (and Yahoo! Calendar needs to step it up w/ an AJAX version, maybe this is the Zimbra team)

2)  Just make it simple to copy and paste the event information so I can stick it in a blog post or an email or in a calendar.  The mark-up and tables are really messy. 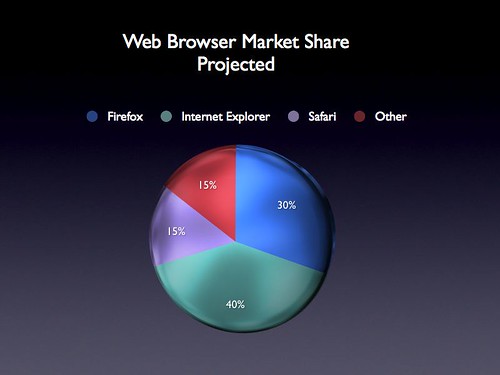 I've been tracking browser market share since 1999. What amazes me about it is the fluctuation over the years. You'd think it would be more stable but it's not. Two more things: 1) before the web was young and so users were being added like crazy. Now it's more of a zero-sum game. 2) With all this talk about browsers, Flash has *all* the users. It amazes me how they did it. mozilla.org should have Adobe and Flash in their sights if keeping the Web open is their top priority. Adobe and Flash scare me.

Have to go to the beach now…I'll update this post in a bit.

*draft* before I forget

Once a user downloads a web page, that web page is technically theirs to do whatever they want, print it, mark it up, annotate it, etc. Doesn't mean the content on that web page is theirs nor is the code, yes from a technical (I have it in my possession) standpoint but no from a copyright standpoint. Once a page is downloaded or even as it's loading, that user technically "owns" that page. This isn't any different from downloading anything off the web, an .mp3 file, a .xls file, a word document, a pdf file. Once a document is in my hands, on my computer, it's mine.

I'm curious to see if other folks agree or disagree or if I'm once again just stating the obvious. I'm not necessarily sure that what I've mentioned is clear or even necessary for folks to understand.

Online video advertising was introduced last year and can be seen on ESPN.com, Business Week, c|Net, New York Times, etc. The standards for these video ads are still unclear:

What's got folks salivating about this technology is that online video ads are measurable (television advertising is harder to measure). There can be a clear action that's taken afterwards too (a clickthrough) but more importantly the advertiser can understand how many times the advertisement has been played and can also receive information on browser/os/location and possibly user demo info if that person is logged into the web site.

If you know that a 30 second ad on a good television show can cost $80 – $100k just for those 30 seconds, you can see the potential revenue.

In 2007, online video advertising will start to get normalized/standardized in terms of length of time, position, metrics, etc. One thing is clear about the Internet, advertisers/salespeople are efficient and can get their act together quickly in finding ways to make money.

The IAB (Internet Advertising Bureau) I believe is where all this stuff will be shaken out. Sadly, the Web may get annoying again as video ads have the potential to be more annoying than pop-ups. Can't wait for that online video ad pop-up! I'm sure they're already out there.

John Battelle asked Steve Berkowitz and Jim Lanzone where Google was vulnerable at the Web 2.0 conference on Wednesday. Either they knew and weren't sharing or they really didn't know the answer because neither gave good answers. I'm going to think the former. Let me tell you what I think and I'll answer this in three parts.

The main components of a general Web search engine are: speed, relevancy, and comprehensiveness. Mastering these elements make for a great search engine/great search product. These characteristics were defined a good while ago. Speed is speed. Relevancy has a lot of leeway and has much room for improvement. Comprehensiveness is how good and complete (breadth/size) is your data source as well as what vertical searches you offer e.g. government search, subject specific search, map search, local search, etc.

What makes up the rest of a search engine is marketing and distribution.

I'm a big Google fan for various reasons. One of the biggest reasons is Google gets it. What Google delivers in their search results is the Internet. What I mean is when I search for something, say directions, I get results from Google Maps, MapQuest, and Yahoo! Maps because that's what I was looking for. In contrast, when searching Yahoo!, it's about Yahoo! services first, then the Internet second; same with AOL Search and Live.com. (It's called driving recirculation.) I'm not sure if the search engines get it. This is also the "I can't put a finger on why I like Google, but I like Google a lot." Well it's because they're giving you or like to make you think that what they're giving you is the Web.*

Google also understands how the game is played. It's an ops game and Google understand ops. They also understand the fundamental concept of referrals and how the Web is a referral monster, in other words, ad machine.

Finally, there are a lot of "haters" out there now. It's just human nature. But what I'd prefer to see is that people take note of what Google is doing and really step up to the plate. It's not just copying their homepage to make it simple and clean, it's about copying some of the same values.

Google is vulnerable in several places:

1) International, they aren't globally dominant. Other search engines are better than Google and Yahoo! in other areas of the world. In country companies have a distinct advantage just because Google is a US based company. Also note that the ad market is great in the US and in some other countries but isn't as mature and isn't the same structure in many countries.

2) Distribution. At the end of they day, Google still has to go through Firefox or Internet Explorer or some other browser or some other client. The food chain is PC, OEM/ISP, Browser, then Search engines and web sites.

3) Completeness. Google can get locked out of various markets because they may not have access to the data or content. Let's say Yahoo! or MSFT buys NAVTEQ, the content provider for Google Maps and every Maps service around. Guess who's up a creek.

* This may change as Google starts hosting more and more content.  They may start giving preferential treatment to their own services and content.  They may also give this preferential treatment unknowingly by working with the content folks they acquire e.g. blogger, YouTube and helping them optimize for the Google search algorithms.  If we see "recirculation" coming out of Google, that may be the start of their decline as a preferred engine and opens up the opportunity for someone else.

This list is based on killer categories and then lists the application that has market share and/or is a superior product in the category. Web sites are not listed here even though many sites have app-like services e.g. ESPN with live sports scoreboard or Amazon wishlists or portfolio apps. Everything listed here is just my opinion and best guess.

Killer apps are mainstream or apps that are stellar and primed to go mainstream.

There are three ways to make money on the Web, hosting, referrals, and transactions, and this is the game the big guys play (Google, MSFT, Yahoo!, AOL, IAC).

You make money on the Web by hosting content, people's content that they give you (like email, videos, work products) or content that you create or license. ISPs make money this way by hosting people's web sites, email, files, and other services. You can monetize hosting of this content either via subscriptions, people pay to access that content, or people pay to put stuff on servers you provide.

This is a basic idea, but most (probably the majority) users don't understand the notion of "hosting". It would be great if this was simplified and understood — people inside the industry call it "the cloud" but still hard to grok for most people.

Referrals is advertising either through banners/buttons/text ads or contextual sponsorship within the content itself. The majority of companies make their money here including Google, Yahoo!, Digg.com, etc. Does not need much more explaining except that the big winners here are those who own the ad network and the direct relationship with the individual advertisers. If you're going into this business, you're likely not going to have direct advertisers and you'll need to partner with an ad network like Google, Yahoo, AOL, MSN, or a smaller network (e.g. Double Click, I'd need more examples here).

Transactional business models are less common but includes PayPal and eBay and iTunes where companies take a percentage for the transactions you make. Outside of iTunes, micro-payments haven't made it yet (it may not ever).
—