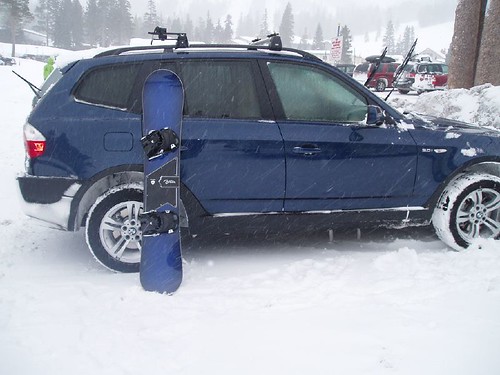 I bought the Consumer Reports copy that reviewed the BMW X3 pretty favorably (ranked #2) except for the "predicted reliability" part which was unfavorable. I'm not sure how they come up with predicted reliability, I think that's bs. I guess they're saying that BMWs in general are not reliable though a bunch are out on the road doing pretty well though aren't they.

Anyway, my BMW X3 is doing fine, 30k+ miles and going strong. In the report, they highlighted handling, interior, and overall drive (and even the best gas mileage in the bunch) as some of the advantages over the others in the small SUV class.

They looked at the Toyota Rav4 (their top choice), Toyota FJ cruiser (which they didn't like at all), the new Jeep Wrangler (the car I previously had and loved but too rough a ride), the new Acura RDX, and the Mazda CX-7. I think the Lexus 330/400H isn't considered a small SUV and interestingly they didn't review the Subaru Forrester. The real competition to the BMW X3 are the Audi A3 or A4 Wagon or the BMW 3 or 5 series wagons.

I like my/our BMW X3 a lot. It's been good to us so far and it's pretty fun to drive. Ultimate driving machine, you know it. :)