[I was asked by Robin to respond to a couple questions regarding the election for the public radio show Open Source. I guess they had read a post of mine a while back but I don't remember it. I guess they have a new question this time.] 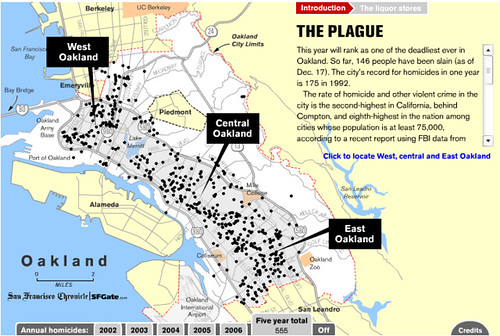 Bang, bang, bang! It happened about 6am, a couple months ago, in the morning directly across the street the day before we were to go on our Hawaiian vacation. A drive by, three shots and a peel out, no one died, a teenage girl grazed by a bullet, no newspaper stories, and the people who got shot at weren't even going to report it. The next door neighbor reported it, they just moved in and paid over $500k for a 3 bedroom house in Oakland, 128 homicides and counting. This was across the street.

Bang, bang, bang! It's late this election night. What is that? Whoa, it's a cane knocking against a fence as I peer out the window. It's Ms. Mary, our 65 year old neighbor, that woman knows everything going on in this neighborhood. I put on my slippers and run to the fence, open the gate, and I find Ms. Mary sitting on the ground not able to get up. She slipped as she was putting her garbage away, it's garbage night tonight. I help Ms. Mary up and tell her good night. That was next door.

Bang, bang, bang! Is that the sound or is it rat-tat-tat of continuous gunfire in Iraq? I've established I'm not a very good citizen. I don't know what's happening in Iraq at all until one day I decided to look it up on Wikipedia. 2,900 people died on 9/11. 2,800 US soldiers have died in Iraq. We've been fighting since March of 2003? 43,000 Iraqi citizens are estimated to have died? Really? How far away is Iraq? It's not next door and it's not across the street.

Bang, bang, bang! I wish that sound is me knocking on the door of all those people who won in today's election — Barbara Lee, Nancy Pelosi, Diane Feinstein, Arnold Schwarzenegger and everyone else. Congratulations on winning your election, now can you do something about all this banging.