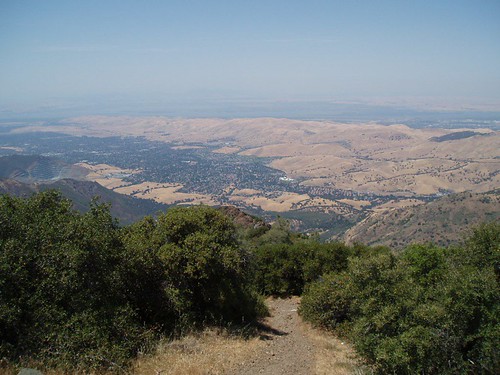 The elevation at the top of Mount Diablo is 3,800 feet. I had been up there once before but with a triple chain ring (as opposed to a double chain ring which I have, or a "compact crank" set which is double chain ring but w/ smaller gears so acts more like a triple.) With a double chain ring, you're supposed to be a stronger rider and you can go faster. I do feel much stronger on the bike than the past couple of years. Let's just say I didn't fall at the very top, where the % grade is fairly ridiculous and pretty mean considering you've climbed all that way already.

The views from the top are good but frankly it's the same as the views from 2,400 or 3,000 feet. The climb is pretty challenging and the descent from the mountain is epic.

I'll probably look to climb Mount Diablo again before this season is over. It's really a slow, slow climb. I much prefer the East Bay hills where it's a 20 minute climb, a bit of a descent or flat, and then climb some more.