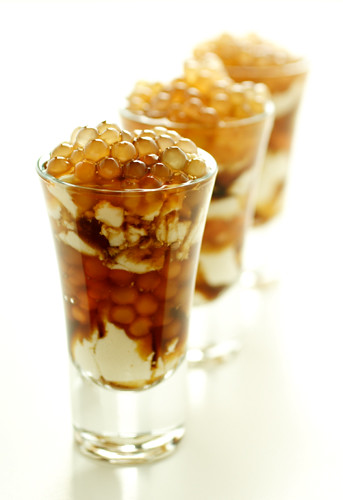 Taho is basically soft soy bean curd and you can find it at most grocery stores but getting it fresh is better. Sometimes I get mine from Hodo Soy Beanery at the Berkeley Farmer's market or at this Chinese grocery store in downtown Oakland. The first time I went to go pick it up at Hodo Soy, the vendor gave me this look like "you know what that is, you're Filipino." I gave him a glance that said "yup". Mind you, we're in Berkeley.

Sago is tapioca made out of cassava or yuca root? I think. It's pretty much flavorless and lots of those tapioca drink places or bubble tea places have them. There are bubble tea places in San Francisco and there's one near UC Berkeley, they're popping up.

The brown stuff I guess is just sugar, I never thought to ask what it was. It's some cane sugar syrup thing. All of it together and the fact that it's cheap makes it addictive. The taho supposedly originated from China and the tapioca was brought by the Spanish as cassava originates from South America.

Anyhow, I used to often eat taho and sago as a kid and I kinda remember the whole experience. We used to get it from a vendor who walked the streets yelling, "taho, sago". When I eat it now, there's a lot familiar about it and it's one of those foods that makes/keeps me Filipino.

It was cool to be able to find a good looking photo of it on Flickr. It's not necessarily the most photogenic food out there. If you want some taho and sago you can go to the Philippines or to Goldilock's Bakery, there's actually one in Mountain View on Rengstorff.